For those of you unfamiliar with the tidyverse, it is a collection of R packages that share common philosophies and are designed to work together. Most if not all, are created by R-god Hadley Wickham, one of the leads at RStudio. I was introduced to the tidyverse-packages such as ggplot2 and dplyr in my second R-course, and they have cleaned and sped up my workflow tremendously ever since.

Although I don’t want to mix in the political debate, I came across such a wonderful example of how the tidyverse has simplified coding in R. On the downside, those unfamiliar with the syntax have trouble understanding what happens in the code the author uses.

Running the following R-code will install the core packages of the tidyverse:

These consist among others of the following:

There are several other packages included (e.g, stringr), but the above are the ones you are most likely to use in everyday projects.

Now, how about dissecting the code in the post. The author (1) loads some functionality in R,  (2) scrapes data on approval rates from the web, (3) cleans it up, and creates a wonderful visualization. S/He does this all in only 35 lines of code! Better even, 2 of these code lines are blank, 3 are setup, 6 have aesthetic purposes, and many others could be combined being only several characters long. Due to the tidyverse syntax, the code is easy to read, transparent, and reproducible (it only consists of two chained code blocks, after loading the packages), and takes only 7 seconds to run!

In the rest of this article, I walk you through the code of this post to explain what’s happening:

Below, the author then creates a list containing the links to the online data to scrape and run it through a magrittr pipe (%>%) to apply the next bit of code to it.

map_df() comes from the purrr package and applies the subsequent code to every element in the earlier list:

Below, the author then starts a new chained code block. S/He first changes (mutate()), from the ratings dataframe, the approval & disapproval data with a custom function (get rid of the % sign and divide by 100), which is then piped through:

For readability, I split the code here, but it actually still continues as depicted by the %>% at the end.

The output is now entered into the ggplot2 visualization function below:

Layers and details to this plot are specified/added using +

Theggplot()command at the start automatically prints the plot when it is finished (when no more + is found). The result is just wonderful, isn’t it? With only 35 lines, 2 chained commands, and 7 seconds runtime. 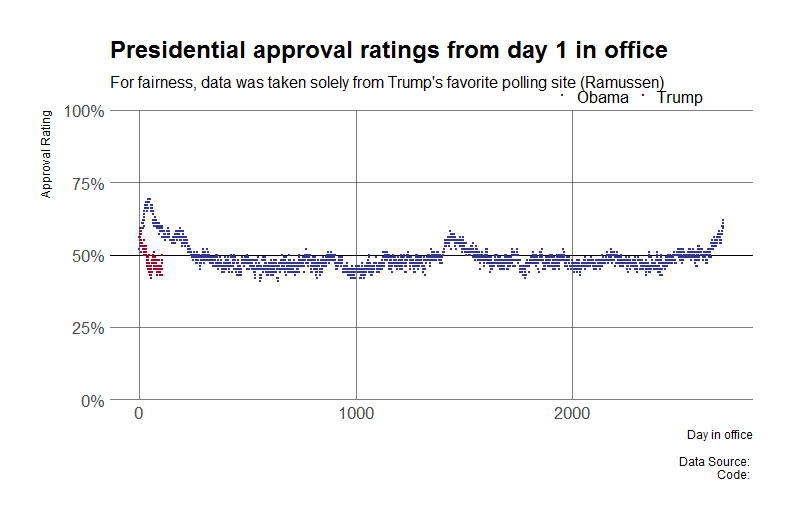